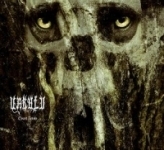 Norwegian Black Metal isn’t something unusual, and VARULV being a sideproject isn’t something unusual either. Starting in 2005 the 2 UNSPOKEN-members Kent and Julian decided to show us their misanthropy in form of this radical form of musical expression. Well, that being just my fantasy, the misanthropy-issue here. Usually I don’t care about all this Black Metal talks about misanthropy, anti-christianity, pentagrams, inverted crosses, trolls, cakes and lollipops and stuff like that and I feel that I have not the necessity to lose more words about this in this review as the music should be the most important and not the image. Well, for me at least. And I feel good about that, even if some might disagree here. On VARULV’s first musical output, their demo CD "Svart Totem" they offer 3 songs + one atmospheric outro. The brand of Black Metal the band is playing is traditionally Norse straightened Black Metal, little comparable to SATYRICON when talking about the riffs and entire direction. We have here a great guitarsound and a great sound in general which suits the cold atmosphere perfect. VARULV convince the most when playing slow to midtempo showing their musical skills and offering great riffs, like on the awesome titletrack. For a first output "Svart Totem" is simply brilliant, offering Black Metal you often don’t get in this quality on regular label releases. Energy, musical skills, atmosphere and great songwriting – everything is here and on top of it you have an awesome packaging of this limited CD release. For fans of Norwegian Black Metal VARULV is a band with a lot of potential, even if only considered as a sideproject, and this first output is a release worth to check out. One additional advice: better hurry up as this release is limited to 166 copies and my copy is 93. Available at www.trazeroeuno.org or through the band directly at julian@ofsdal.no, sommerseth.kentare@gmail.com or www.myspace.com/varulvnorway.