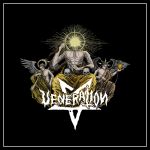 Ever since DEEP PURPLE first played Jakarta back in 1975, Indonesia has been a Metal Republic. However, in the Black Metal genre which may seek to shock and transgress, Indonesian bands were never nearly to anything shocking as one might expect. They rather walked the uncharted territory of mythology and mysticism expressed in the traditional spirit of early first-wave Black Metal. Matthieu Canaguiers “East Of Hell”, which is an interesting documentary on Indonesian Black Metal features SACRIFICE, and one can see why their music that provokes the essence of PENTAGRAM and BATHORY is unsurprisingly inspired by Javanese ancient warrior mythology. It’s no wonder, local Black Metal bands remain consciously underground, and given the amounts of Black Metal releases sprouted from Europe and America, local releases get drowned sooner. Not until spirited practitioners like VENERATION comes forth and recall the old spirits. Two years after the EP “Thy Infernal”, the profane Black Metallers from Indonesia now returned with their debut full-length under the wings of Fallen Temple. Soundwise, “The Core Of Revelation (Triumphant Resistance)” is a natural continuation of the material from the aforementioned EP. That is unbending Black Metal with a mixture of the sweltering South-Eastern atmosphere. In addition to the earsplitting tremolos, the Indonesians very successfully build the overall atmosphere of the album. The tempo changes will remain in the head for a long, and so is the unforced transitions. You can clearly listen to that in ‘Retaliation’ and ‘Decimate (Mutatis Mutandis)’. But that’s not all and here come the exciting variations. The Punk elements of ‘The Gleaming Flames Of Burning Hadith’ may not come as anything new, but VENERATION’s style comes a bit differently and it’s provoking as hell. Deeper into the record, ‘Excess Of Darkness’ and ‘The Speckled Dust Of Sanhedrin’, will provide possession into the record and surely will leave anyone with a reflective sensation. Like listening to the old records of TORMENTOR, VARATHRON or NECROMANTIA. And it will remain memorable, as the compositions are engaging where each instrument plays its part with compelling simplicity. The overall production is old school and throughout the record it uphelds resistance in the core. With all these, it’s suffice to say this full-length (if I have not overlooked something) is the finest Black Metal from Indonesia that I have heard and also one of the best releases to recall from 2022. Check out this debut, as with this VENERATION can show that in their country not only Death Metal stands and with persistence they can edify their name in the deep cobweb of Black Metal. To find out more about the band and release please visit their label at www.facebook.com/fallentemple666