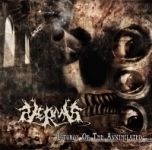 Germany’s uprising brutal Death Metal act VERMIS basically evolved out of the ashes of CRUCIATUS, which in the year 2000 used to be the grim Black Metal outlet of Markus Zeitz (guitar, drums & vocals) and Marco Boms (guitar, bass, keyboards) besides their main band OBSIDIAN GATE. Due to lack of inspiration and the fact that they rather quickly got bored by the limitations within the boundaries of Black Metal they decided to take some time off and didn’t return until 2003. At that time Markus had come up with some new material, which was a lot more inspired by brutal Death Metal already, but didn’t really fit into the musical concept of their main band… So, as a result they ended up forming VERMIS in the beginning of 2004, adding longtime friend Henning Auer to their ranks, who took over the vocals. In the summer of the same year they recorded a rehearsal demo, that featured two songs (‘Scenario Of The Sickening Crawl’ and ‘Torn From The Vacuum’) in order to start promoting the band a little… The VERMIS line-up finally got completed when former KHAOSICK drummer Phil Infernal and bassplayer Tobias Bruchmann (NIGHT IN GALES, IN BLACKEST VELVET) joined in. The latter unfortunately didn’t stay too long with them though (he left VERMIS again in April 2005), so that they are currently in need of a new fourstringer. But that shouldn’t really be a problem as their recently released debut full length “Liturgy Of The Annihilated” turned out extremely impressing! Just imagine a big dose of “Blessed Are The Sick” – era MORBID ANGEL songstructures (especially in the slower parts) mixed with highspeed, technical Death Metal in the vein of HATE ETERNAL and the likes and you’ll already get a good idea of what these guys are all about. As usual, unoriginal as fuck, but as brutal Death Metal was never really about innovation, but sheer intensity and heaviness in the first place I couldn’t care less. The album features 9 tracks, as well as a really intense instrumental and a short intro and easily lives up to international standards, set by bands from the US, Sweden and Poland mainly. If someone would’ve played me this record, only telling me that it’s a band from Germany, I would probably have presumed that they hail from the East Frisian area, as they perfectly fit in between all the other likeminded acts from there (INGURGITATING OBLIVION, FEARER, ANASARCA etc.). But surprisingly they are not! They hail from Düsseldorf and are definitely ready to conquer the international Death Metal underground! A solid production and very pro-looking packaging complete the overall very positive impression. There’s only two little things that should’ve been fixed: the title track of the album ends apprimately at about 5 minutes of playing time, but continues to play with silence for a little while (and there’s not even a hidden track to follow) and the included video for the song ‘Room 1166’ doesn’t work at all (which I’ve tried on different PCs)… Apart from that: a very promising debut of another great German act to keep an eye on in the future! Links of interest: www.vermis.org, www.darkwind-records.de