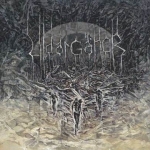 VIDARGÄNGR
A World That Has To Be Opposed
(War Anthem Records)
38:49min

VIDARGÄNGR from East Germany are active in the underground since 2010 and will now release their second full-length entitled "A World That Has To Be Opposed" via War Anthem Records. The press info describes their style as nihilistic, compromiseless and furious Black Metal and this is not too far away from the truth. After a menacing intro with desperate screams, the band starts their inferno with the opener ‘Burning Abyss’ and already this track proves their grown songwriting abilities. Their first self-titled full-length had a more raw and dirty approach with some Crust / Punk notes and this has developed into a more Scandinavian orientated direction. Somewhere between cold Norwegian Black Metal and the far more melodic Swedish Black Metal of the mid 90s, the band found their own style and this sounds very matured now. ‘Burning Abyss’ delivers cold but melodic Black Metal but more in vein of bands like ALLEGIANCE or DISSECTION combined with the coldness of the rougher IMMORTAL. Their sound is not a simple copy of the mentioned bands but surely influenced by some of those. Their sound is melodic but very grim and cold and the vocals are rough enough to spread out some more coldness and desperation. The guitars are racing precisely but always with some really memorable melodies. The drumming is fast and precise and together with the fine bass lines a solid fundament for their cold sound. The only problem of the album is, that it demands several spins to locate and hear all the small details like melodies or special drum parts so the listener is forced to give this beast some more spins until the cold beauty of this album fully appears. Surely the quality can be found at first view but the album is worth to be checked more detailed. The production of TAD music studio is clear and powerful and worth to mention is also the well-fitting cover artwork of Alexander Kavtea. Those of you who want to keep it cold in spring, should grant this album some attention. I am curious to follow their further development in the future. For more information, check out the band via the following sites: www.facebook.com/vidargaengr, www.war-anthem.de