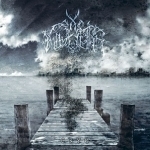 This Italian band has already put a decent discography together. Formed in 2004, they’ve released the two demos "Winter Rehearsal" and "Rising From Abyss" (both from 2005), the EP "Eclipse" and three split albums "The Army Of Chaos" (2007), "Vidharr / Ovskum / Mørke / Gremory / Deathrow" (2010) and "Cold Journey Through Madness" (2011) with… and DEAD. Started as a doomy Black Metal outfit, the style shifted more towards Doom as becomes clear on this second album "Cryo". The blasting that could be found on their 2009 debut "Eclipse" has completely vanished. Even the re-recorded track ‘Processed’ that appeared on the 2011 split is stripped from the fast drums. Too bad, because now it feels that the tension this album could use is missing. Intensity is found in some riffing on combination with double bassdrums. More, it seems like the band is moving to a more rocking approach. The clean vocalparts done by guitarist Moerke contribute to this. "Cryo" probably marks the ending of an era. The new sound is ok, but relies more on the riffing that is pretty decent but rather passive. Even groovy. The production is decent as well, but could have been fuller in second guitar department. What still amazes is the tight drumming by Atum. A true trump for the band, considering the man has done duties for IMPIETY, MALFEITOR and SETHERIAL. The seventh and last track is a cover of EYEHATEGOD and fits good to the rest of the album. The level on this album is good, so check for yourself whether this is your stuff. Fans of SHINING, late SATYRICON, KOLDBRANN, a less progressive ENSLAVED and likes especially. Check the following links for more info: www.facebook.com/vidharrlegion, http://maaprod.web.fc2.com