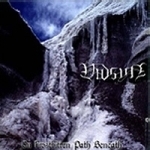 VIDSYN from Norway pretty much consists of one man alone: Nattsjel. Founded in 1999 the band went through quite a few line-up changes until the recording of this EP. Once again, Nattsjel had to find session members and he found some big names willing to help him out. So we’re not tortured by a plastic drum computer but rather by a human one, namely Hellhammer. The other Black Metal "star" is Nocturno Culto singing on ‘Stormsend Winter Realm’ and ‘Evil Rises Darkness Falls’. This might lead to the conclusion that VIDSYN are playing "grim" Black Metal. Instead, I’d rather call it Viking because of the guitar harmonies. Fortunately, the band neither comes up with big BATHORY choirs nor with keyboard bubble gum but skillfully balances on the edge between the brutal and the "pagan" Black style. Rather mid paced hymns with a rough and cold touch that sometimes reminds me of the most Viking sounding band in the world, DOOMSWORD from Italy and sometimes a little of IMMORTAL. Nattsjel’s songwriting is definitely above the average – not redefining the genre but memorable, Hellhammer finds a way to support the good impression of "On Frostbitten Path Beneath" with some playful elements and Nattsjel’s vocals don’t even sound weak in comparison to one of my favorite Black Metal vocalists, Nocturno Culto. Leaving aside philosophy, there are two more reasons why you’ll have to get the vinyl version of this one: there will be bonus tracks included and the phantastic cover art simply deserves the bigger format. Finally, there will be a European tour in 2005 but don’t ask me about the line-up. Instead, check their homepage every now and then: www.vidsyn.net