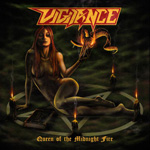 A combination of old school Heavy Metal and Speed Metal is often a killer combination – and this is also something that this Slovenian act has well understood in my opinion. "Queen Of The Midnight Fire" doesn’t set bridges on fire in terms of bringing something new on the large table of the aforementioned genre but it’s no denying either the VIGILANCE camp makes everything sounds like their debut album would hold some title as one of those long-lost underground Metal gems that has just recently been released in some physical format (you know, those unreleased albums – there’s obviously a plenty of them yet-unreleased from the 80s period of underground Metal). What VIGILANCE do on "Queen Of The Midnight Fire", they mix old MAIDEN-ish riffs (and NWOBHM basically) with some similar type of musical ideas that one you can find from the old GRIFFIN (US), TYRANT (US) SAVAGE GRACE and OMEN (US). It’s an intriguing mixture of nostalgia really, in which little yet simplistic things get appreciated within the band’s music. VIGILANCE have realized it nicely that sometimes less is more: you really don’t have to pack up your songs with hundreds of ideas in order to win a listener’s attention on your side. VIGILANCE do an excellent job at that department of keeping it simple, capturing some essential vibes and feelings of the past times on this record – and therefore it becomes nearly impossible to resist a record like this if old school Heavy / Speed Metal is something that makes you bring out your old school patch-covered denim vest out of your closet, for the sake of jolly good old times. Good stuff here. More VIGILANCE can be found at: www.facebook.com/pages/vigilance/105590836178568, label: www.metaltankrecords.com