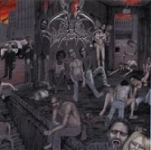 Ex – GRAVE DESCENT guitarist George Grant originally started VILE VINDICTION in 1987 and later reformed the band with Jim Nickles, a founding member of MALEVOLENT CREATION. Whether or not they recorded any demos or EPs prior to this one is unknown. As far as anyone knows, this is the first commercially available release of the band. It’s a small wonder Nickles left VILE VINDICTION on the back burner. If this is the sort of thing he was recording back in 1990, he probably would not have made it very far. VILE VINDICTION would have been a good, brutal, faceless band, but in a sea of thousands. The music is competent with plenty of true blue Death Metal riffs and blast beats, but there lies nothing beyond that. Why this EP was released in 2008, as opposed to any other year within the last decade is unclear. It would have received the same reaction in 1998 as it has in 2008: a warm and coridal welcome. www.myspace.com/vilevindiction2