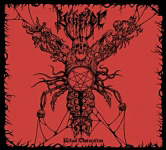 VILIFIER from Brisbane, Down Under is an outfit that has been around already since 2007, playing Ancient Barbaric Death Metal as they call it. After a demo and a live tape, they now present their first official EP "Ritual Obscuration" via Forgotten Wisdom Productions in digipak format. Somehow these guys remind me of DARKTHRONE back in 1991. Not as a copy of their sound but due to the fact, that they play Death Metal, but not being confident with the classic sound of it and looking for other ways to get their material produced in a rawer way. The production is more suiting for Black Metal bands looking for a raw production. The microphones seem to have been placed far away from the drums, so the sound is dirty and fits more into early Black Metal productions, even though the blast beat attacks and pounding double-bass are missing. But it seems that they started as a pure Death Metal outfit and are moving slowly into a rawer Black Metal kind of sound now, similar to DARKTHRONE back then. The vocals are also more Black Metal influenced. The opener ‘Bloodvomit Evocation’ is a clearly Black Metal influenced song, while tracks like ‘Lacerated Flesh Of The Ancient Wisdom’ and the title track ‘Ritual Obscuration’ are influenced by classic Death Metal, sounding very old school and like old tracks from the Finnish Death Metal scene. The last track ‘Twilight Dancer Of Cosmic Devastation’ again goes into the Black Metal direction. Most of material is mid-tempo and a dirty and rotten sounding bastard of blackend Death Metal. If you are into this kind of hellish stuff, try to check those guys out. www.facebook.com/vilifiercult, www.forgottenwisdomprod.com