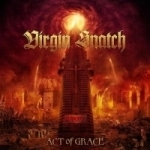 A name like VIRGIN SNATCH is perfect to make jokes about. I seriously have no clue why this Polish Thrash Metal outfit chose a name like this for musically such a serious project. In my humble opinion this could be a huge handicap for them, simply as this is Thrash Metal, not Porn Grind. Let’s skip that, imagine they have a better name which keeps us focusing on the music only. “Act Of Grace” is a Thrash Metal album par excellence, perfectly produced including songs in the TESTAMENT and EXODUS calibre. A little weird are the clean vocals from time to time, though they have a lot in common with Warrel Dane from NEVERMORE and Jonathan Davis from KORN, nevertheless I think the brutal version suits them better. Musically songs as the title track ‘Act Of Grace’ are awesome and brutal riffmonsters which could appear on any TESTAMENT or EXODUS album without problems. Same for a song as ‘Through Fire We Grow’. The final song ‘It’s Time’ is an unusual song compared to the other 8 songs on this album. It’s a ballad in memory of Vitek Kieltyka (R.I.P.), the former drummer of DECAPITATED, including a melodic guitarsolo played by Vogg, Vitek’s brother. “Act Of Grace” is VIRGIN SNATCH’s 4th full-length album and musically they are on a very good way. Recommendable to those interested in the bands mentioned above.