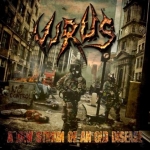 Many British Speed and Thrash Metal bands from the 80s, have their musical roots deeply into the Punk / Hardcore scene of those days. VIRUS, these originally Brighton based British Thrash Metallers that have relocated to London since their early years, was formed the same year when one of the most important Thrash Metal albums ever, "Reign In Blood", was released. And they weren’t any exception to that rule either, for having their Punk / Hardcore influences sticking out of their early stuff. On VIRUS’ debut album, "Pray For War", released on the small Metalworks label in 1987, the band sounded raw, punky and unpolished – much like their fellow countrymen in ONSLAUGHT did on their own debut album "Power From Hell". Ever since VIRUS took a much more Thrash orientated musical approach on their next 2 albums, "Force Recon (1988)" and "Lunacy (1989)", ’til going on the 18-years hiatus. Who of us could have sincerely guessed VIRUS would make a return back to the limelight again, after being away from the Metal scene for so long. In 2009, the band self-released a new, very limited 4-track EP titled "Raped By Mutants", which was the band’s first recording after 25 long years. And now – 4 years later, I am holding another new EP titled "A New Strain Of An Old Disease" in my anxious hands and this is honestly a somewhat solid sounding, old school Thrash Metal release, musically drawing its influences from early times of KREATOR, SLAYER and VOIVOD even. It sounds like the VIRUS camp has re-invented their own brand of Thrash Metal one more time, which at least earns my undivided admiration without any second thoughts. For the most part, VIRUS lead us towards the times when German Thrash Metal pioneers KREATOR released their "Terribly Certainty" and "Extreme Aggression" albums in the end of 80s. The influences of those 2 landmark KREATOR albums, are definitely a part of VIRUS’ sound nowadays – probably mostly due to vocalist Coke Finlay’s tendency to sound almost like Mille Petrozza on this 7-track EP. The production also fits well for VIRUS; it’s crispy and heavy enough to support aggressive, strongly 80s reeking Thrash assaults. The hidden 7th track on this EP, is simply hilarious, telling what the REAL men are made of, ha! However, remembering the past a little bit, VIRUS sounds as good as I remember them sounding like on their earlier albums – and yeah, they are absolutely back in the biz again, keeping their flags proudly high for the British Thrash Metal – just like they should do in the first place. If you wanna get infected by this VIRUS, you can do so by going straight to: www.facebook.com/virusthrash, label: www.killermetalrecords.de