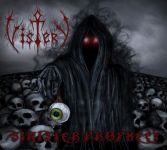 VISTERY from Minsk in Belarus is a Death Metal outfit that was founded in 2011 and they devoted themselves to old school brutal Death Metal in the vein of Polish horde VADER or even some of the US outfits like SIX FEET UNDER or OBITUARY when it comes to their song structures. Their second output "Sinister Prophecy" was already released in 2012 via Satanath Records limited to 500 copies in CD format. Their Death Metal consists of some really groovy guitars, really nice bass-lines and leads, straight drumming reminding me of Donald Tardy back in the days combined with some fine deep grunts similar to Chris Barnes but not as guttural as he used to present them on the first CANNIBAL CORPSE spawns. Consisting of eleven tracks, "Sinister Propehcy" is not inventive at all and all tracks, all leads, all drum parts and grunts have been heard a dozen times before on several other outputs. So why wasting the time to check those guys? Easy, this output is quite a diverting one, easy to listen to and easy to enjoy. Voices readers surely have the aspiration to get quality hints in the old school sector. VISTERY delivers professional material with an old school approach but with a modern and powerful production and allow their old school Death / Thrash influenced material not to sound too old school and 90s like. Their lyrics cover all kind of genre typical topics and the cover artwork is ok and a bit like the first covers of German defunct Invasion Records. So if you like to check some less known bands and want to enjoy simple and old school stuff, give these guys a chance and check them out: www.facebook.com/pages/vistery/143999899003642. Label contact: www.satanath.com