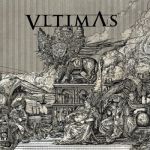 VLTIMAS
Something Wicked Marches In
(Season Of Mist)
38:17min

If you also miss the madness from "Blessed Are The Sick" until "Domination" and some of what continued and begun on "Illud Divinum Insanus" – by the mighty MORBID ANGEL and the black masses I AM MORBID these days are performing live, the quite new constellation VLTIMAS might be up your alley. This is the newest abomination of Mr. David Vincent who laid down vocals on the already mentioned albums and wrote some music and lyrics as well – in the style that is delivered here on "Something Wicked Marches In". A vocalist / bassist doesn’t do it alone, so he has teamed up with a quite competent duo in drummer extraordinaire Flo Mounier of CRYPTOPSY fame. I caught him and CRYPTOPSY live last year, and despite the triggered madness it sometimes becomes, he is a beast behind the set – and the drum sound on this recording is actually quite nice and old school, most of the time. On guitar Mr. Vincent has turned to darkness and Norway, and hooked up with Rune "Blasphemer" Eriksen, who first got carved in stone in the Black / Thrashing demons AURA NOIR and later raised himself on a piedestal in MAYHEM, before returning to the Black / Thrashing madness and now VLTIMAS. This is a return and continuation of the epic and grande MORBID ANGEL sound, with the trademark Vincent growls and massing parts, parts I’ve always have been a fan of, so this album has hit a soft spot with me, I have to admit. Match the vocals with stellar rifffing, where we get all from classic heavy Death Metal to more epic Black Metal inspired riffing, close the the Blasphemer riffs from the MAYHEM albums he wrote, disharmonic leads and great big open hooking riffs, and the great drumming from Mounier we have a winner. On top of that, the sound that Jaime Gomez Arellano and his Orgone Studios has cloaked this album in, a dark, drawing, massive sound that attacks you like a rabid dog, though still leaves room for the instruments and vocals, and highlights all the small parts as synth, leads, disharmonic fallouts, pace shifts and so on, well made. One of the best and most complete Death Metal albums this year? It could be, though how could such three legends not made an album with such an impact, everything else would be a fall from grace, and "Something Wicked Marches In" is for sure not! Quite a natural follow up and progression on "Covenant" / "Domination" and that’s quite good in my book! You have eyes to see and ears to hear: www.facebook.com/vltimas, https://seasonofmist.bandcamp.com, www.season-of-mist.com