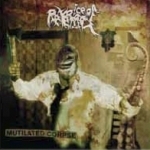 It’s always a pleasure for me to discover a good newcomer Death Metal band, even more if it is a German band. I always thought it’s kinda strange that with the exception of MORGOTH Germany never ever had a big name in the Death Metal world. I’m not sure if this will change with VOICE OF REVENGE, after all I think it’s nothing less than a hobby band and they most probably play for fun, but what they do is pretty good, at least for a first release. I got to know them on a small festival pretty close to where I live and sadly missed their live appearance as I entered the place too late. I heard that they did a very good gig though. Time will tell and I’m sure I’ll have the possibility to see them live in the close future. VOICE OF REVENGE stands for Death Metal, brutal Death Metal if you ask me. This bunch of young guys make a perfect start with ‘Bringer Of Death’, a Death Metal song with a riff BOLT THROWER won’t feel bad about. What I like about VOICE OF REVENGE is that they don’t exactly sound Scandinavian, American or whatever and the best, they have not one tiny Metalcore influence at all! Congratulations guys, that’s how it should be. Taking influences from bands as GRAVE, DISMEMBER, HYPOCRISY or BOLT THROWER you should know what to expect. It’s not about blastbeats, not about being technical as fuck, its Death Metal plain and simple. OK, we are not talking about the next German sensation, not another 2nd MORGOTH or finally another German Death Metal flagship, because VOICE OF REVENGE are at their very beginning. They created a pretty good demo CD, tight played with cool songs, now I hope they take the time to develop and create more cool songs like the 6 songs on this CD. A good start and as this is such a young band I hope to hear new creations which will satisfy my expectations, haha! Have a look on www.myspace.com/voiceofrevenge and ask for their demo at goreflesh@arcor.de. Price for this 6-track CD is 6 € in Germany, foreign countries should ask for postage at first.