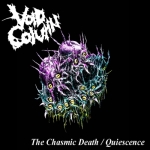 The name VOID COLUMN is really new on the map of Metal. Based in the Quebec area, these Canadians entered the arena last year with the demo tape “The Chasmic Death”, followed by a second demo “Quiescence” this year. Now both demo recordings were released as one EP on Colombian Triumvirate Of Evil Records. And with great justice, I think. These six malevolent and unruly eruptions of Doom Death Metal are surely not a reinvention of the genre. But they are among the most malicious bands of the genre. Extremely tight, awesomely raw and ultimately fierce songs like ‘Cave Dwellers’ or ‘Hollowed Out Graves’ from the first demo are a real blood feast for those who like their Death Metal the brutal way. And the songs from the “Quiescence” demo do not only take the same line but they are at least as great. Especially the completely annihilating ‘Apparitions (Tenebrous Embodiment Of Grief)’ is an absolute killer of a Death Metal song. Those of you who like their Death Metal raw and bloody will surely have a lot of fun with VOID COLUMN and “The Chasmic Death / Quiescence”. For more, visit https://voidcolumn.bandcamp.com or www.facebook.com/triumvirate-of-evil-records-345474882236469