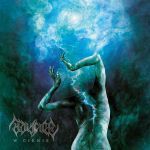 Debuting with two singles off their debut 2020 album, Polish act VOIDFIRE has just released “W Ciene”, their second full length album courtesy of also Polish label Szataniec. Describing VOIDFIRE as melodic Black Metal is an understatement. Their music encompasses a bunch of different influences, but it is deeply rooted in the (dare I say) classic sound of early ’90s Black Metal. “W Ciene” takes all the best parts of the subgenre and comes up with an evocative journey into harsh darkness, filled with melancholic interludes and eerie passages. The detailed guitar work from Jakub is full of razor sharp tremolo riffs, open chords and clean arpeggios that merge perfectly to create a cold atmosphere that somehow feels peaceful and frightening at the same time. Jakub also takes care of the bass guitars, providing a good support with its constant variation and sway. Krzysztof’s vocals stand right in the center of this voyage, with an abrasive high pitched tone, but also adding some neat cleans and some spoken word. He goes from one side to the other, adjusting and solidifying the concept behind each song. Finally, Lukasz’ drums keep morphing, going from savage blast beats to calm airy rhythms, adding a lot of dynamics with some interesting fills and solid double pedal execution. The mix is clean and balanced and while I think it is mandatory to keep the coarseness of the subgenre, the production of “W Cienie” is sharp. Maybe a bit too “hifi” for die hard fans, but that feature adds a lot of presence to the detailed performances and the constant interactions between the instrumentation and the vocals. There is almost a dialogue happening throughout the album. The distorted guitar sound is fierce and precise, followed by a snappy bass tone. The drums could’ve used a more organic feel, but nevertheless, they are present enough to cut right through the mix losing none of the nuances and subtleties. The contrast between the intensity of the fast parts and the gloomy melodies present in “W Ceine” takes the listener on a wild and ethereal ride. This album is a good example of uncontrolled yet elegant rage, which should pique the interest of any avid Metal listener out there. Recommended. You can contact the band at www.facebook.com/voidfirebm and get the album from their label www.facebook.com/szataniecpl