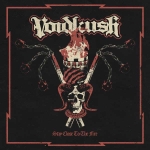 VOIDKUSH are a band from Spain with members of Black / Thrash act INSULTERS. The sound here leans more towards the Doomy side, meaning the kind of sound CATHEDRAL went on to develop after their debut; I guess it would be called Stoner these days. I am not particularly into Stoner bands, although I revere their masters, such as BLACK SABBATH, PENTAGRAM and ST. VITUS. Still, in this debut album, the Black and Heavy Metal influences are too strong for this to be truly deemed a Stoner album (and that scores points with me). The retro cover artwork also follows a re-established pattern of 70s like posters we have recently seen popping up (even in RAM’s and ENFORCER’s latest albums). After the effective opening instrumental, the title track presents the vocals, and they are much more Black oriented than I expected. Instrumentally the band is quite good, the production is very heavy and bassy and they use a lot of wah-wah and occasional cow bell. Even so, their sound is not limited to an attempt to recover the old 70s influenced Doom. They alternate speeds nicely and display good, aggressive riffs and solos and pounding drums. Listen for example to the great ‘Ophis Defied The Gods’ or ‘Inheritance’. There’s a lot of cool stuff happening in this album. I cannot, however, escape the impression that this kind of rather one-dimensional vocals lack the expressiveness this music asks for. I believe the band would profit from a bit more singing other than just this somewhat straightforward Black Metal approach. The vocalist kept reminding me of the early stuff of DECAYED (a band I saw live perhaps dozens of times in the mid 90s), but with less range. Still, this is a good debut, with good compositions and powerful delivery. www.facebook.com/voidkushmetal, www.equinoxdiscos.es