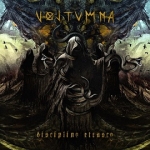 The name VOLTUMNA derives from the Etruscan mythology, for more information please visit the library of your choice. "Disciplina Etrusca" is the second full-length by the Italian horde and if you take a look at the band’s photo it is hardly surprising some classic Black Metal is in the air. Do not get me wrong if I describe the music as some kind of general store. By no means it is meant the music of VOLTUMNA being shapeless and boring. It is more they cover a wide range of influences, I guess almost everything which was labeled Black Metal in the 1990s can be discovered on "Disciplina Etrusca". Almost, not everything. The only tendencies missing are elements which became later on typical for the sub-genres Viking and Suicide Metal. There are simply no modern or avant-garde like influences on this release, even the usual cover the band picked is old school to the bone – ‘Black Metal’ by VENOM But instead of telling you what is not on this album I would like to tell about the highlights. The best moments are when the keyboards take over the part of a leading instrument, EMPEROR and LIMBONIC ART may serve as blueprint. The other great moments are when the guitars are playing those very special melodic Swedish Death / Black Metal riffs, especially since the vocals are more deep grunted Death Metal vocals…, there are still musicians keeping the heritage of Jon Nödtveidt and DISSECTION alive. www.voltumnametal.com, www.facebook.com/voltumna