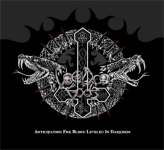 Ladies and gentlemen, please fasten your seat belts. DIES IRAE, DECAPITATED, BEHEMOTH, NUCLEAR RABBIT, CANNIBAL CORPSE, MORBID ANGEL, MONSTROSITY, NOCTURNUS, ACHERON, DAVID SHANKLE GROUP, MANOWAR, SEVERE TORTURE, CHRIST AGONY. Those bands are or have been in several ways associated with VOODOO GODS, some kind of all-star band. Founded back in 2001 by Alex Voodoo under the name SHRUNKEN HEAD, which was also the name of the first EP released in the year 2008 (re-issued 2012). Interestingly enough I did not have this in mind when I first listened to “Anticipation For Blood Leveled In Darkness”. But I guess it is not so bad, by no means I was irritated by this illustrious bunch of names. And my first impressions was: well-played Metal. Simply Metal. George ‘Corpsegrinder’ Fisher from CANNIBAL CORPSE is taking on the vocals, but do not expect pure Death Metal here. Of course there are Death Metal parts. But accordingly some modern Thrash Metal components, some old school Thrash Metal ingredients, some typical Power Metal chords or just plain and simple Heavy Metal riffs. No blast-beats, 40 minutes mid-tempo with lots of double-bass drumming. I really do not like the word progressive, because it is very often misunderstood or used in a odd way. But for this album the term progressive is quite suitable. Every musician is given space to be innovative and advanced without losing the feeling for the complete song. Due to the fact that all involved musicians have a pronounced knowledge regarding Metal, this output is quite enjoyable. Maybe some of you know Jean Baudin, that is the guy who plays a 11(!)-string bass guitar. Jacek Hiro and David Shankle are on guitars and additional vocals are done by Seth Van de Loo. The lyrical concept deals with voodooism and spirits of nature, a kind of metaphysicial conception of worship and ritual practise. If you are interested in further information, go and visit the VOODOO GODS homepage. “Anticipation For Blood Leveled In Darkness” is some kind of all-purpose Metal. I can not imagine any Metal fan being frustrated by this release (well, then I’m probably number one here Mirco, because I find this release totally annoying, with all its mass appeal type ingredients – from the typical modern production to the guitar hero like soloing and overall mainstream-ish songwriting… everything sounds so completely calculated to me and the album has no soul at all! Stuff like this was the reason why I already started to lose interest in Metal more than once – Frank). Maybe not everyone wants to spent money on this album, but at least you have to acknowledge the outstanding musicianship behind VOODOO GODS. Or in the band’s own words: “Just there with one mission: To play METAL music. That’s all what counts.” www.voodoogods.net, www.facebook.com/ovgfs, www.saturnalrecords.com