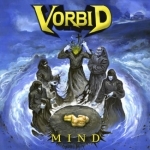 Norwegian Thrashers VORBID were formed in 2013. By 2015, they released their first single, followed the next year by their self-titled debut EP. Come 2018 and after two singles, they now have released their debut album "Mind". After my first 3 listens, I got a word stuck in my head: "bold". I can’t remember the last time I encountered such an album as "Mind". 5 songs just under 50 minutes of great technical and progressive Thrash Metal. I can’t deny I was thinking VOIVOD, CORONER and maybe VEKTOR while I was listening to ‘Invention Intervention’ or ‘To Mega Therion’ (no relation to CELTIC FROST btw). And just when I though this could not get better, here comes ‘Mind’, the 22 minutes closer. Yep, you read that right. 22 minutes of absolute brilliant musicianship. In a world full of "retro" Thrash bands trying to sound old school relying on mimicking classic stuff and over-production, VORBID takes inspiration from both, the technical and the melodic aspects of the genre and they have crafted an awesome and furious album that never let go of you. Now, VORBID’s vocals may not be for everybody. Basically, you either love (also rhythm guitarist) Michael Eriksen’s vocals or you hate them. I remember going through the same "acceptance process" upon first listens to Sabin (TOXIK), Killian (VIO-LENCE) or Anderson (FORBIDDEN) for example. But in the end, all these vocalists would not fit in any other but their respective bands. And so it goes with Eriksen’s high pitch screaming vocals. They do tend to get one-dimensional at first, but once you get used to them, you realize they are an integral (and very identifiable) part of the band. Now, when it comes to the music, Ericksen and Daniel Emanuelsen churn out memorable riff after memorable riff. Emanuelsen also provides sharp and varied leads. And all of this is kept together by the astounding work from the solid rhythm section composed of drummer Marcus Gullovsen and bassist Jonas Tellefsen. The production is perfect for the band. It has all those dynamics that have been long forgotten and that I dig so much. Every instrument intertwines fluidly and organically in the mix, so in the final product, the songs are alive, shifting the feel and the intention after every listen. Any self respected Thrash Metal fan should go ahead and get this album. Hell, ANY self respected Metal fan should get it! This is so good it hurts! Go ahead and like the band’s official page here: www.facebook.com/vorbidband. And get their album from the label here: www.indierecordings.no