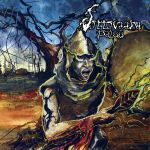 I felt confused after listening to “Paluu”, the debut by the one-man band VOTTOVAARA from Russia. The opener ‘Om Asato Ma Sat Gamaya’ is about seven minutes long and with the use of clean chanting and a jaw harp it sounds like Folk music, only for the last minutes some electric amplified guitars can be heard. So clearly Folk Metal, but the second song ‘Tie Karjalaisten Maalla’ is more a mix of Power and melodic Death Metal with an epic touch. The following two songs are following the same pattern, whereas during the last song (‘Kiitollisuuden Kalma-Vaaran’) the Folk Metal elements return. Two times Folk Metal, three times Death Metal. In any case at least a somewhat schizophrenic release. If you like both Folk Metal and Death Metal this album may be something like the holy grail for you. But for me, who likes little less than Folk Metal, this album is definitely an annoying one. This is sad somehow, because the way Mr. Bredis (the responsible musician) is intermingling melodic Death Metal with keyboards and Power Metal is a pretty unique blend for my ears. So I am glad that the two demo tracks ‘Vottovaara’ and ‘Tie Karjalaisten Maalla’ from 2017 are added, because both songs are more in the vein of the above mentioned epic and melodic Death Metal. So when someone has become curious, more information can be found here https://vottovaara.bandcamp.com and here www.facebook.com/wrothemitter