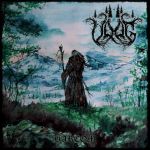 Hungary’s one-man project VRAG, with third full-length “Harcom”, has created five songs and 45 minutes of sheer, unpolluted, mid-tempo Black Metal that doesn’t veer from the soul of the genre. The album cover itself sets the tone of the album with its staffed wanderer in the wilds. Sometimes it’s art like this that draws me to listen to the album to start with, as it damn well should be. But it’s really inside which counts. There’s not a track under 8 minutes on the album. And in this case, that’s a good thing. It lets each song breathe and develop its own atmosphere. The first track ‘Harcom’ takes a couple of minutes before erupting into a blast-beat-laden, old school guitar-blitzing Black Metal miasma. Nothing new here, and nothing new wanted from the listener. There’s nothing to dislike. ‘Belül Halott’ (meaning Dead Inside), is just that… a depressive, plodding track gathering all the nothingness in the world and having it envelope our minds. ‘Az Én Keresztem’ continues the slowed down tempo with fuzzy guitars and relaxed drumming. The whispery vocals fit right in as they hide in the background without intruding. ‘Ott Vagy A Szélben’ is more of the same, which is absolutely fine with me. I don’t need anything else. The last song ‘Búcsúzom A Némaságtól’, after a little while, picks up the pace to help end the album on an upbeat and satisfying delivery. VRAG won’t open any new doors or trod different paths. But “Harcom” will give us Black Metal followers exactly what we crave… atmospheric, foggy, mesmerizing tracks of despair, anguish and adversity. For more info, check out www.facebook.com/vraghun, www.facebook.com/filosofemrecords