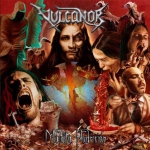 I am personally not that aware of the Argentinian underground Metal scene but only just happen to know there are lotsa Metal loving people there in Argentina. Well, in fact Metal bands too. This trio named VULCANOR has been around for just about 3 years, and besides their 4-song EP titled "Jauría De Lobos", which they self-released and put out in 2011, the band has also released their first debut album in 2013, which they decided to name as "Maldita Pudrición". This 11-track record of theirs is basically about going back to the early roots of Heavy Metal. VULCANOR’s Spanish-sung Heavy Metal – churned out with some slight Thrash Metal influences here and there, is a surprisingly intriguing package of all things exotic, at least for this particular inhabitant living here far up in the north, in Finland. What makes VULCANOR’s stuff work so well, is actually pure simplicity of their song structures. They keep their songs pretty stripped down indeed, occasionally reminding me of early MAIDEN, the Paul Di’Anno era. Most of the time the guys put firmly trust on their own comfort zone, which is playing old school Heavy Metal in its purest form, accompanied with pretty nice amount of melodies. But the again, VULCANOR ain’t really afraid of pushing pedal to the Metal either. A perfect example of this is clearly a song called ‘Luchando’, in which all hell seems to break loose for them – especially in the first half of the song. Hearing something like "Maldita Pudrición" is a really refreshing experience all in all – and it also proves finely that Heavy Metal music is an universal thing – something very special that connects so many people together all around the world now – as well as in the future for sure. So, long live the united brotherhood of Metal, and in the very same breath I wish a long life for VULCANOR, too. \m/ More about these Argentinian Heavy Metal heroes can be found at: www.facebook.com/vulcanor.metal