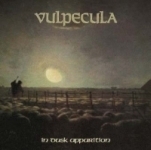 Recorded in 1998 ”In Dusk Apparition”, the final chapter of Vulpecula’s story (the fox, btw) gets closed. The band around ex – Order From Chaos man Charles Keller released some quite extraordinary music. I guess some of you can remember their “Fons Immortalis” 10” album, released back in 1997 by German label Merciless Records. Charles vision of combining Vangelis and Steve Roach styled “space music” with extreme Metal is probably not the taste of everyone, but if you can imagine something like this you can get the manifestation on ”In Dusk Apparition”. The final result sounds “spacey” and grim, sometimes monotonous and weird. The playing of the drums is not very technical but gives the music something of an own with many disharmonious sounding landscapes. Third song is a cover-version; what else than ‘Major Tom (Coming Home)’ was to be expected? Right! They did a really weird cover-version of that old German NDW hit. That song was already recorded in 1996 and previously only available on a limited edition compilation tape. Fourth track of that album seems to be my favourite as it is a very slow song based on atmosphere (but all songs on that album are slower than mid-tempo). ‘Culmination’ sounds monotonous but also hypnotic with the clean spoken vocals. I can imagine that this is not music for the masses out there, but some people will understand that album. Glad that I belong to those few. The get-up of that album is not special at all, but consists of the lyrics, some liner-notes and a short biography written by C. Keller. Listen to ”In Dusk Apparition” and get wrapped in profound darkness… www.invictusproductions.net