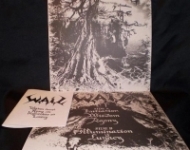 This Finnish band with the quite distinct and rather obscure name WISDOM THROUGH AGONY INTO ILLUMINATION AND LUNACY, abbreviated into W.A.I.L. (which of course also have other meanings as a word) released their self titled debut album back in 2009. Though the album had such large qualities that the label Ahdistuksen Aihio Productions now has decided to release it again, with better mastering and new layout. Then we have the question(s), is it justifiable to re-release an album just 2 years after the initial release and why didn’t any label pick the band up in the first place? Well, to answer my own questions: the album might be quite hard to find nowadays as the band released it themselves, that usually don’t call for big quantities, and if the music have quality, such a batch will soon be gone. The second question is a bit harder to get narrowed down, as there are many possible answers. Perhaps the right labels didn’t catch the band back then, perhaps the music was too far out to grasp, until the Metal community praised it and so forth. No matter what, here we are today with W.A.I.L. fresh from the press and ready to be unleashed once again! Musically the band wander between gloomy, almost droning and catching, in a bizarre and disturbing way, Doom mixed into a grim world of thrashy Black Metal and ferocious Death Metal. All painted onto canvasses of pure brilliance, the compositions are mysterious, catching and varied. One moment you are getting dragged through darkness and death with no hope of getting your sanity back, when it explodes into frantic brutality, until you get a headbang-inducing thrashing riff that implodes into utter darkness once again, draining your body and soul for any trace of hope. W.A.I.L. is moving into territories that has been explored, though not pushed fully to its limits. There isn’t much conformity in the way the Fins approach their music, and even though they cover a lot of space, they control and keep their ideas aligned for an effective and continuous musical output. There are many landmarks of known parts, a nice way to keep, the rather hostile universe of the band, recognisable for fans of Metal, though W.A.I.L. never dwell with the known for a long time, they always move forward or implode it all. It is an exploration of emotions, you are getting drawn and pushed away, again and again. The band masters their atmospherically buildups and paint the sky whatever color they need it to be, to fit their expression the best. The cliche says that Fins are masters of sorrowful and gloomy music, and this release is a perfect example of that, even though it adds quite a lot more colors to the usual ‘Fin’ palette. Some music are not made for describing and this release is such an example, it needs to be experienced on body and mind. We are getting through a misanthropic world of Doom and gloom. Doom / Death, Black Metal and sheer avantgarde. W.A.I.L. is pushing the envelope and has made a perfect work of art, that I can imagine will become a pillar of inspiration for many years to come! Also props to the label for delivering the promo-package with lyrics, such are usually useful, especially when dealing with deeper releases as this – and the great lyrical approach do add further to the music and the experience thereof – a dark world of insight and evolution. www.ahdistuksenaihio.com