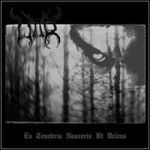 It’s always a pleasure discovering old and forgotten gems in the Black Metal underground. Here we have a reissue of an album originally released in 2004 from a pretty unknown band active in a scene that I consider one of the best Black Metal movements ever: the Polish one. WAR was a criminally underrated band from Poland, now defunct and that was able to play a very aggressive and cold form of traditional Black Metal in its purest form. You know, Poland gave birth to some of the most orthodox and unconpromising bands in the movement: early GRAVELAND, LORD OF EVIL, THUNDERBOLT, INFERNAL WAR, NORTH, FULLMOON, INFERNUM, SZRON etc. “Ex Tenebris Nasceris Ut Deleas” was the second full length album recorded by WAR, originally released in 2004 and now re-issued by Under The Sign Of Garazel Productions, a devoted and intransigent Polish label that launched one of the most interesting Black Metal bands of the last few years: CULTES DES GHOULES. This album contains six songs for almost 32 minutes of fast and violent Black Metal with a touch of melody and melancholy. The production is very cold and all the instruments are perfectly audibile. The guitars are harsh and noisy, a choice that fits very well with the non stop tremolo picking bombardment. There are some slowdowns, but the album is mostly focused on a killer wall of hammering blastbeats. The vocals are one of the highlights of the album: possessed, evil, abrasive and frozen screamings (imagine Hat and Pest from GORGOROTH mixed together). And the early works of the cult band from Bergen are for sure a major touchstone of what WAR can offer. In conclusion, if you missed the first press of “Ex Tenebris Nasceris Ut Deleas”, now you have the chance to add to your collection a solid piece of Polish Black Metal history. Recommended! www.facebook.com/utsogp