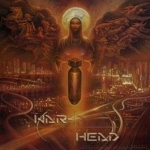 I haven’t been able to check out the band’s music up to now and I am quite happy that I finally had the chance to listen to their stuff. This trio from Croatia (formed in 2002) was rather active as well on the live sector. The squad supported amongst others WARBRINGER (2010), EURE ERBEN (ex – DARKNESS) on their European tour in 2011, shared the stage with GRAVE VIOLATOR, VIOLATOR etc. in 2012 during their shows in Europe and did a successful tour this year with Frankfurt’s finest, aka TANKARD, in Brazil. A couple of successful festival appearances consolidated their reputation as an excellent live act. "Still No Signs Of Armgeddon" is the official debut album by these Balcan Death / Thrashers which already saw the light of day in 2011 by the English based label Denim & Leather Records. Hence official because there’s a 2008 release called "No Signs Of Armageddon" including the same tracks like on this disc as the self released material back then was available for the ex – Yugoslavian region only. The tracks for the 2011 edition were all re-recorded in studio Armageddon / Osijek and the original cover was revamped by Joe Petagno who is wellknown for his artworks for MARDUK, MOTÖRHEAD etc. These three Metal warriors don’t try to break speed records and focus more on heavy and aggressive riffing with a technical edge. The right decision if you ask me as they are able to create a mighty wall of sound with thunderous double bass. Most of the songs range in the mid pace and moderate up tempo department but of course you get some (high) speed eruptions as well. Each song / detail was elaborated very well – nothing was left to chance. Despite the mentioned technical level the entire album sounds very catchy. WAR-HEAD offers a powerful and more than solid album which combines sheer intensity with a sense of melody in a perfect manner. In case your faves incl. mighty acts like newer SODOM or later CARCASS then you should give them a try or better get hold of this eight tracker. Tunes like the riff monster ‘War-Head’, the varied ‘1000 Eyes’ or the final, with bursting speed refined ‘Free’ should actually convince every quality conscious Thrasher out there. For all further information and ordering details check out www.war-head.net or www.funeralmoonclothing.com/denimandleather-records.htm.