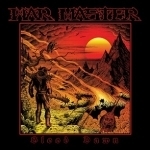 Is it just me, or is the year 2013 ‘back-loaded’ with the best music? The first half of the year was a little "eh", but as we’re tilting towards winter, all the killer shit seems to be coming out (GRAVE MIASMA, LVCIFYRE, NOCTURNAL GRAVES, UNHOLY LUST)… At any rate, you can count this new EP from WAR MASTER as a must-have. These guys already bursted out of the womb with a sick debut album in the early BOLT THROWER tradition (with an insane bottom-end, I might add), but "Blood Dawn" just takes things to supreme new levels. WAR MASTER are a band who can do a simplistic chugging riff really well. They just know where to punch you right in the teeth with the hook. The band gets definite points for strong drumming and especially the solos of their talented guitar player (walking the tightrope between finesse and flagellation). For me the highlight was ‘The Flesh That Does Not Rot’ with its breakneck PESTILENCE type riff and whirling leads. If these guys can release a long-player at this consistent level of quality, WAR MASTER are poised for retro Death Metal royalty. See more at: www.torture-garden.com, www.facebook.com/warmastertx

WAR MASTER - Pyramid Of The Necropolis - by Michael Oelschlegel