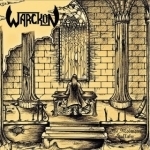 Metal from Belgium always occupied just a small space in my own personal metallic Hall Of Fame. But the bands who made it there I really enjoyed a lot and they always find their way to get a spin either on my turntable or CD player even after all those years. Just think of superb squads like CYCLONE, the total raging BLACK SHEPHERD, technical brillant TARGET or pure early (Speed) Metal like ACID or WARHEAD. These newcomers from East Flanders are one of these newer bands coming from our neighbours which can make it into my above mentioned holy vaults. "The Madman’s Lullaby", the debut by WARCKON, was originally released by the band itself but it was re-released a while ago with a revamped (and better) cover artwork by French based Metal specialists Emanes Metal. These four lads don’t try to be the fastest or most brutal out there. WARCKON have more an emphasis on a ballanced mix between aggressive and subtle, technical skilled arranged tracks (using an accoustic guitar here and there as well). That’s a good thing I think as the band wants to sound different from other outfits to create unique music. That’s why the squad varies their style and incorporates a lot of Speed and some Heavy Metal elements in their sound as well. Of course there is still something which needs to be improved, may it be in the songwriting department (a few not so strong tracks) or production wise. But you can’t expect from a debut album that everything is flawless. For a first effort "The Madman’s Lullaby" is quite solid. Just listen to the energetic, Bay Area influenced ‘Trapped’ with its cool leads, ‘Lord Of Lunacy’ or ‘Shattered Illusions’ (nice arranged alloy of Speed / Thrash and HM). So if you are into that style and like to check out new bands then you should give them a try. A good start for these Metalheads from Belgium I think and I am curious how they will develop in the future. www.warckon.com, www.emanesmetalrecords.com