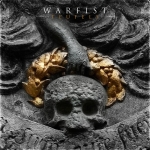 Zielona Gora in Poland is where this unholy three-piece comes from. To put it straight, the step the band took from the last records “Metal To The Blade” and “Grünberger” is rather huge. The current recording features a much better production, while keeping the organic noisy touch they need. Blackened Thrash Metal is their profession, and their love and passion for especially early VENOM, BATHORY and the noisy chapter of SODOM is obvious to hear. It’s difficult not to bang the head and do the old gnacky wacky air-guitar while listening to tracks like the thundering ‘Behind The Walls Of Keough’, ‘Meadows Of Bizarre’ or ‘Pacifistic Carnage’. Experimental moments and the ability to look over the rim of your tea-cup fastly destroys the idea of WARFIST just as a band trying to imitate their old heroes. How else can one explain classical Heavy Metal tracks like the massively riff-orientated ‘Tuol Sleng’ or the ‘Rite Of The Incubus’ with its Hardrock moments and a refrain ready to unleash a gigantic mosh-pit? Mosh-pit? Argh, some people start feeling a lack of trueness here? Listen to ‘Angel Fuckin’ Maker’ and ‘Sinful Bonds Of Blood’ to get some early SLAYER, early KREATOR spirit to calm down. Finally a really good record ends with an outstanding and awesome cover version of Arthur Browns ‘Fire’! I am The God Of Hellfire! Says maybe a lot about the Punk attitude these guys from Poland do live in their rehearsal room and daily lives, too. Well, Metal is just Punk with long hair, Lemmy once said. He probably was right. This band is another proof! www.facebook.com/warfisthorde, www.facebook.com/godzovwar