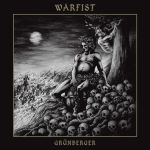 WARFIST is a Black / Thrash Metal band from Poland that has been around for a while now and this is their third album. It begins with a beautiful acoustic guitar intro and then all hell breaks loose irredeemably. They don’t pull their punches; this is a detonation of extremely aggressive and extremely well-performed Metal. Technically they are very good, and you can insert here the usual cliché about Polish drummers, this guy is phenomenal. Bass and guitars are fast, with razor-sharp sound and precision, and I also enjoy the vocals a lot. They fall into that raw old school Thrash category akin to vocalists like Peter Hobbs (in fact, there is something of HOBBS’ ‘Satan’s Crusade’ in the opening track ‘Black Army’). If the production sounds powerful and modern, it is obvious that their music is untainted by modern sounds. They have the right influences from the right decade for Black / Thrash. The lyrics focus on violent historical episodes of Zielona Góra (Grünberg), WARFIST’s hometown, making this a concept album. Even the cover artwork, with that demonic-looking Bacchus figure, is connected to this, as there is a local annual wine fest beginning with a ceremony in which the keys of the town are offered to this ancient roman god. And WARFIST are indeed followers of ancient Metal gods like VENOM, BATHORY or POSSESSED. With great riffs, great songs from beginning to end, ‘Grünberger’ is a furious and formidable album that proves that, by 2019, Metal is still very much alive and well. Visit the dark history of Grünberg at www.facebook.com/warfisthorde, www.godzovwar.com