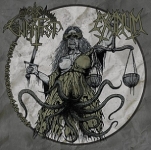 Well, I don’t know how to start this review since I have a critical approach to everything that is close to the so-called Black / Thrash in its contemporary form. WARFIST and EXCIDIUM, both from Poland, are into that territory. First of all, I can tell you that I’ve enjoyed the EXCIDIUM part more than the WARFIST one of this split CD, released by Godz Ov War Productions. WARFIST offer here three compositions plus one DØDHEIMSGARD cover. The same thing for EXCIDIUM, but they pay tribute to IMPALED NAZARENE. The music is brutal, fast and aggressive, well executed in terms of performance and good production in general. This production opens with ‘The Tomb Of Desire’ from WARFIST. Black / Thrash attack in its purest form, same thing for the two coming tracks. The DØDHEIMSGARD cover ‘Angel Death’ is OK. The EXCIDIUM part of this production starts with ‘Suicidal Perspectives’, a good track charged with some cool riffs, aggressive vocals and varied transitions and passages. The next track, ‘Denial’, has a good instrumental intro. Interesting riffing again. The IMPALED NAZARENE cover ‘Karmageddon Warriors’ is OK. The music is far from refreshing and interesting to me. It is just one more production into this genre. Follow WARFIST here www.facebook.com/warfisthorde and EXCIDIUM here www.facebook.com/excidiumdivision. Here you can get it: www.godzovwar.com