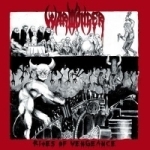 The coverpainting can be considered either as a great piece of art or total bullshit, haha. It’s up to your own interpretation, the music on the other hand can only be considered as fuckin’ killer Thrash Metal, played tight and impressive. “Rites Of Vengeance” is finally available on vinyl although recorded already in 2005 and remixed in 2006. I have no clue if a CD-version of this awesome recording is available, true Metal-lovers will crave for the vinyl version anyway. Well, some music is meant to be played on vinyl. The LP comes next to this cool coverartwork with an inlet including all the lyrics on one side and many band- and partypictures (as known from so many other old Thrash Metal records and not only those) and 11 songs including the FROST cover ‘Into The Crypts Of Rays’ (which is rather well-done, taken from a live recording, played tight and a bit faster than the original, with little of the gloomy atmosphere of the original left but with a certain Punk attitude which fits quite good to this song) and an old demotrack plus a short intro. I haven’t heard of this Italian band before, but after enjoying this recording a few times I can tell you that I will listen to it many times again and hope that WARMONGER’s way with “Rites Of Vengeance” is just the beginning and that a new output is in the pipe soon. Check out their great song ‘Possessed By Metal’ from www.myspace.com/warmongerthrash and you will fall in love immediately. Again strictly limited to 500 pcs and therefore hurry up and get in touch with High-Roller-Records (www.hho-records.de).