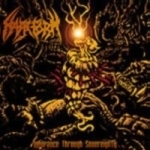 Oh, a new DYING FETUS release!? No. But that’s the first thought when listening to WASTEFORM, who can’t deny certain parallels to the present spearhead of Hardcore-influenced Death / Grind, although their Hardcore influence is much more distinct. On eight songs (plus acoustic instrumental and outro) WASTEFORM frequently vary from extreme Death Metal blasts to vicious Hardcore breakdowns and the other way around, have brutal vocals and excellent musical performance, so if you’re not allergic to Hardcore and like Death Metal you should risk an ear on this release. Band website: www.wasteform.com.