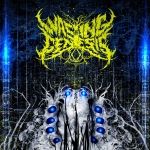 What comes to mind when you think of the Spanish town Málaga, the home of WASTING THE GENESIS? As far as I am concerned, it is mainly sunny vacations and the Moorish history of Spain. Until now, I did not connect Málaga with great music. And this will not change after I listened to the third release from WASTING THE GENESIS, an EP called “Prey”. Simply because this EP is as far from being great music as Neptune is far from the sun. Imagine a mediocre Death Metal band trying to sound like MESHUGGAH and failing on any level – you’ll have a rough idea of how “Prey” sounds. But that might be a little too flattering all the way. To be fair: WASTING THE GENESIS know how to handle their instruments properly. On the other hand, they don’t know how to compose comprehensible songs. Break after break, riff after riff, but no real song or even a bursting idea. Instead you get the feeling that you have to solve a mathematical formula with two unknowns. And the distorted vocals with hints on pigs squealing don’t make it any better. If I should summarize “Prey” in just two words: completely redundant! Just in case you’re into maths check out www.facebook.com/wastingthegenesisband and www.facebook.com/bloodfirepromo