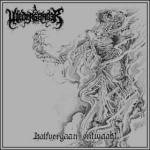 Just in case you are wondering about the strange title – WEDERGANGER are hailing from the Netherlands and they use their native tongue. The band’s name can be translated as revenant or ghost / undead. Personally I always considered a band using a different language than English as some kind of refreshing aspect to the music in general. A song title like ‘Wera-Wulfa’ sounds, at least to my ears, more mysterious than werewolf. The trio is a newcomer (founded in 2013) and after just one demo Ván Records is now in charge of the debut. Three-quarters of an hour Black Metal in the most common way. Harsh, grim and frostbitten furor, but also slow paced and more depressive or melancholic plus mid-tempo mashing. Each song represents a different aspect of the genre Black Metal, not to forget the usual piano interlude and the sometimes clear vocals. The sound is good, although it sounds a little bit too spick and span. Simply no surprises on this release, each one can judge on his / her own if this a good or bad sign. The only things above average are the splendid cover (done by the German illustrator Karmazid) and the limited hardcover CD digipak with a glued 16 paged booklet containing lyrics, drawings and a folded poster in DIN A 4 format. www.wederganger.nl, www.facebook.com/wederganger, www.van-records.de