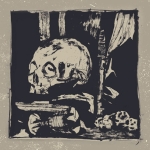 I can’t really tell what I feel about this release. It somehow doesn’t make sense to me. A split of Dutch Black Metal newcomers WEDERGANGER and atmospheric Black Metal horde, LASTER. Self-titled, two songs and released by Ván Records. So far the details. WEDERGANGER released with “Halfvergaan Ontwaakt” last year a well received first full length. Which convinced through raw, mid-paced brutality, and dirtiness. Though they were already playing around with atmospheric elements, repetitive themes and melodies, I wouldn’t necessarily associate them with avant-garde or atmospheric Black Metal. Thats why I don’t get the cooperation of these two bands. Since LASTER is that 2005 styled WITTR rip off, which kind of tries to jump on that arty, ”inner struggles” train. The whole thing sounds just like out of ideas, a thousand times done better and to boot, recorded by some west-coast Americans already ten years ago. They sometimes sound just like they come from a WITTR listening session. So similar that it kinda becomes embarrassing. Their first album “De Verste Verste Is Hier” is logically an over-dramatizing of the same riffs over and over again. For the atmosphere. I have absolutely no problem with atmospheric Black Metal but they just seem to chew long chewed cud again and again. Specially on this split. The record starts with ‘Klaroenen Van De Dood’ and a known WEDERGANGER recipe. A differently modified, evil melody repeating itself. Till they slide into a simple mid-tempo ride. The song increases more and more. The tempo stays. The elements merge very well thanks to a clever songwriting. Even when they switch in the middle to a dynamic LASTER like riffing they still provide their style. Bottom line, the WEDERGANGER song is diverse and entertaining. LASTER’s song ‘Vederlicht Verraad’ is just what you expect when you have listened to Cascadian / atmospheric Black Metal / Post something, Emo Crust / Hardcore the last years. An attempt to get you through some fast brutality in the beginning but pretty soon it gets soft, melodious and dreamy. And everything repeats till you don’t know if it’s been an hour or just five minutes. For me just a waste of time you could come up with something really catchy. I believe there is still quite a big audience for that stuff so check it yourself and dream away at: www.facebook.com/wederganger, www.facebook.com/lasterspraak, www.van-records.de