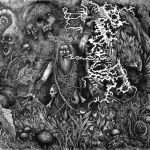 "Animist" is the first full length album released by the German experimental Black / Doom Metal band WERIAN. It contains three very long songs for almost 45 minutes. Ok, I got to be honest: this album is not my cup of tea. Don’t get me wrong, I’m really into both Black Metal and Doom Metal, but WERIAN don’t impress me in a positive way. There are tons of influences here, a sort of big melting pot of various genres: Psychedelic Rock, Melodic Black Metal, Doom Metal, Dark, Drone, Funeral, Minimalist, Ambient stuff etc. The problem is that the result is a mixture of ingredients without rhyme or reason. And that’s a pity, because WERIAN definitely have a good amount of creativity and know how to play their instruments, but the atmosphere lacks of the evilness, the coldness and the rawness that I would expect from a Black / Doom Metal album. NORTT, FAUSTCOVEN, FUNERAL MOURNING, early FORGOTTEN WOODS – for example – are a good example of what I’m talking about: a sick and depressive sound that I can’t find in WERIAN. I think that the weakest point of "Animist" are the Rock oriented guitar distortion, as well as the clear and polished sound production. In conclusion, I would have preferred, if WERIAN had cultivated more the darkest and most extreme sides of the above mentioned styles, instead of dwelling on a melodic and boring approach. www.facebook.com/werian666, www.eisenton.de