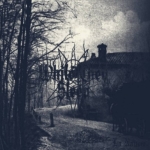 Following the Ukrainian pattern of bleak, cold and acute Black Metal, WHILE THEY SLEEP’s debut album reveals another promising name from Crimea. “La Nausee” has the harshest guitar tones ever, interwoven in high pitched harmonies, dragged by slow-paced drums that speed up at times for short periods, giving the songs some kind of torturing vibe, unusually, from a professionally satisfied torturer’s perspective. Despite having considerably slow songs, WHILE THEY SLEEP don’t create a bothersome feeling, but do provoke a cloistering urge and a certain need to temporary seclusion. This is not amusing music, not the background for any sort conversation, suiting better as the soundtrack to the long nights of deep thinking that succeed the shittiest of our days. “La Nausee” seems to demand focus on its mortifying pulse of negativity, and the track’s title ‘Infinite Length In A Moment’ denounces how engrossing such pulse can be. The ten tracks stick to what really should be called old school Black Metal, with little appeal to great audiences and even live performances. They are also extremely consistent to each other, not diverging a single moment from its initial purpose. I sense a certain similarity with their country fellows GROMM, particularly to their third and best album “Sacrilegium”, which also carries the same asphyxiating mood. Nevertheless, these nameless Crimean invest less on external elements and explore the basic instruments as a whole, barely having any moment in which certain instruments stand out individually. Probably, that was one of the main characteristics of this genre, so well grasped by the Ukrainian scene. If you’re tempted to check this band out, do it by listening to the track ‘Hermaphrodite Of Being’, which is the longest one in the album, but does carry most of the elements, atmosphere and riff examples used throughout the album as whole. On a side note though, ‘Thy Temple’ is for now my favourite track, presenting amazing arrangements and slightly fast passages that sound intentionally hold back in its performance, giving the song a weird and uncomfortable feeling. Definitely a great album made as in Black Metal’s old days and clearly a great spin!!! Play it loud, not to provoke others, but your senses!!! http://satanath.com/sodp