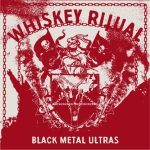 While seeking from where WHISKEY RITUAL are hailing, Parma, Italy came up and so far the only familiar thing for me about this place is a football club from this city. But, they certainly don’t give a dime about that nor are they associated. Singer Dorian Bones (CARONTE), guitarists Andrea Ponzoni (ex – FORGOTTEN TOMB) and H. Desecrator, bassist Cristiano Rastelli (ex – SELF-DISTRESS) and drummer Gianmarco Rossi (FORGOTTEN TOMB) got together during 2008 to raise some storms in the feisty underground. This parallel project of musicians from other bands, WHISKEY RITUAL presents itself with direct, harsh, uncompromising and unconventional approach throughout their discography as strong as one EP, a split and four full-length albums. Since their initiation with an EP, "Black’n’Roll" in 2002, they maintained the spirit and legacy which have been wholehearted appreciated by Black Metal fans, but also by the Rock’n’Roll fans, as it’s almost impossible not to be possessed by their conjugation of Black Metal and Rock’n’Roll which spreads disgust, insanity and madness. By following the straight forward and consistent path in "In Goat We Trust" (2010),"Necronomicon" (2012) and "Blow With The Devil" (2015), WHISKEY RITUAL resurfaced with their fourth album “Black Metal Ultras”, released in association with prestigious Folter Records. In just over 30 minutes and 9 tracks, the group passes their message directly and reveals their fury and aggressiveness highlighted with the title track, which shows a ghastly and poisonous take on Black Metal. ‘In The Army Of Hell’, closer to the Black’n’Roll line, as well as ‘Knock Out’, which could be easily regarded as initial works by VENOM without going rusty and ugly. With ‘666 Problems’, the spine chilling punch and dirt that radiated from the guitars will persist till ‘Die Hard’, where the Italians show versatility and their intoxicating song crafting skills. Same should be stated about the fitting ending ‘Denim Demon’, a cover from legendary TURBONEGRO. Throughout the release, as a listener you will be thrown from one state of excitement as well as anticipation because of the sheer versatility it possess, like when beer drenched tones in ‘Knockout’ will rush the blood; ‘Death By Limo’ directly incites furious-aggressive tunes to complete disengagement in the zone of darkness and hatred. "Black Metal Ultras" definitely lives up to its title and fits seamlessly into the history of ideal releases as very few bands can wrap two distinctive genre in such a short burst of time and mix the dirty Punk attitude with hard old school Black and Rock’n’Roll, which all together will taste like a deadly brew. You can just get up on every song and driven by its intoxicating spirit and stubborn speed of the songs, you will join in the celebrations with violent ecstasy. To undergo that vigorous experience, WHISKEY RITUAL’s "Black Metal Ultras" is a must dig into release for all the fanatic followers of these genres. Explore more about the band at www.facebook.com/whiskeyritualofficialpage and visit their label page: www.folter666.de