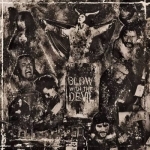 Italy’s WHISKEY RITUAL were floating beyond my radar, apparently these dirty dogs have released two albums before this one, so they’ve been around, and this was supposed to be just a side project which soon mutated into a full-time band. Their intention here is pretty clear – get wasted, make noise! Imagine later age DARKTHRONE raping the corpse of GG ALLIN and the bastard fetus soaked in Lemmy’s piss brewed for 30 years… and the resulting smelly, crusty infantile will be WHISKEY RITUAL. Yeah, fuckers, in boring terms this could be described Black / Crust / Punk, which doesn’t sound too appealing to me – honestly I would just pass it on after a track or two, but for this review I’ve immersed myself into this smelly, raw, punkish Black Metal cocktail, and let me tell you the rewards were… intoxicating! Beneath all this noisy, distorted as fuck sound, WHISKEY RITUAL have some really catchy songs there, like opener ‘Blow With The Devil’ or drunken sing-along ‘Too Drunk For Love’ and feminist anthem ‘Speed & Chicks’. Then it goes more black, like on ‘Satanic Kommando’ and ‘Mephistopolis’, and signals the time to pour more whiskey in you, so that freezing vibes wouldn’t freeze your dick off, but the intensity is there, the aggression, albeit drunken and stupid, boils the blood, giving urges to punch someone. They’ve also got a song ‘Henry Rollins’ where the chorus is fucking lifted from someone else, but I can’t pinpoint it, anyway, it’s one of the most intricate songs musically although it’s far away from being called progressive. So you get the idea, it’s an album you will put on in the middle of the drunken party to take it to the next level of filth, just before you puke all over. Sounds tempting? Definitely check them out then! I’ll go and get me another one! For more info go here: www.facebook.com/pages/whiskey-ritual/142978411858, www.art-of-propaganda.de