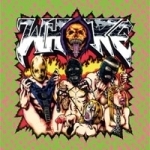 WHORE
Doing It For The Kids
(Moribund Records)
46:52min

Well, this is definitely nothing for kids, but feminist’s and censor’s newest potential target. Whether it’s the comic-style artwork (front cover by Jake Karns, inside layout by Mike Diana) or the nasty lyrical atrocities this US-based three-piece comes up with, WHORE are the incarnation of tastelessness. Victims of their assaults are usually women and children, who get molested, tortured, raped, killed and excreted in the most disgusting ways imaginable and unimaginable to equal parts. I enjoy this form of twisted, utterly perverted humour and musically fortunately these verbal assaults are equally accompanied with straight and brutal old school Death / Grind, that is simply hellish entertaining! The debut by this 2003 – founded project of FORNICATOR, LORD GORE / FRIGHTMARE, ENGORGED members was already pretty cool, but was as stuffed with intro samples as a classical MORTICIAN record, “Doing It For The Kids” now offers more music, which is significantly more varied and still has the sick badass-attitude of the debut. The violent drumming, the straight political-correctness-grinding riffage, the mixture of low natural sounding growls, gurgles and screams reminds of the aforementioned bands kicks ass throughout the entire album and though definitely nothing all to new is offered here (just throw a look at the entire Razorback Records roster) WHORE do their thing damn good. Personally I find them even unusually diverse, with those groovier passages, furious Death Metal elements, rocking Grindcore and the excellent vokillz. In addition to that the angry, hateful spite that drips out of each of the 22 tunes (except ‘Shocker’ which is HAMMERFALL-kinda music crossed with rape-lyrics, pretty funny…) is very appealing in my opinion. WHORE are catchy, incredibly aggressive, crushingly heavy produced and just fucking insane. The G.G. Allin’s of Death Metal!