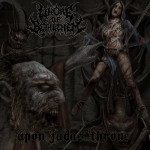 Sometimes prejudice takes over, and paints a certain picture of something uncertain. I had never heard about WHORE OF BETHLEHEM, until I saw their name in a mail in my inbox. I thought to myself: "Well, yet a lo-fi primitive three riff Black Metal band (not that, that is all bad, all the time though)". I used a little while to press play on this album at first, though to my surprise when I finally did, I was attacked by MORBID ANGEL riffing and rhythm patterns, who said ‘Day Of Suffering’?, when the first tune, the title track ‘Upon Judas’ Throne’ kicked off, "damn": I had to think to myself. WHORE OF BETHLEHEM hails from Austin, Texas and is a quite new entity, the band was formed in 2009 and this is their self-financed debut full length, and I can’t quite understand it is self-financed, unless it is their own choice, as the music has the quality for being released on an established label. Of course there isn’t much new under the sun, though the music is delivered hard hitting and quite intensely. A good mixture of our favorite Death Metal fiends of already mentioned MORBID ANGEL, ANGEL CORPSE "Hammer Of The Gods" era, of course one might say, darker forces as INCANTATION and IMMOLATION do also play a role, and then a good deal of mid-ninetines Swedish Black Metal, especially DARK FUNERAL, bands together with the US Black Metal hordes from the late 90s. How can one not headbang to such a mixture? We are getting some nice riffing, a good dark and crushing atmosphere and some nice vocals, it is quite impressive that one man can shift from the most evil and guttural Death Metal growl, to the most sinister and eerie Black Metal scream in seconds, and still deliver with conviction. This album is a good blend of some of my favorite moments in Death and Black Metal the last 25 years, composed into an intense and pounding universe, that actually works quite well, more of that please. A quite well done, to be honest. Behold the unholy blasphemies! More WHORE OF BETHLEHEM information at: www.whoreofbethlehem.com, www.facebook.com/wobethlehem