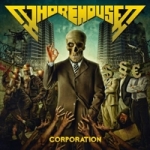 WHOREHOUSE is a long running Thrash Metal band from Poland. They formed in 1995. After 3 demos spaced out in a 6 year period, their debut album came out in 2009. Yes, that is 10+ years after their formation. And they waited another 8 years for the follow up, "Corporation". And even though I haven’t heard their debut album, all I can say is that the wait was worth it. WHOREHOUSE covers every single aspect (and then some) of that early 90s Thrash Metal. I mean, if this album had come out in 1990, it would have a cult following by now. Yeah, it is that good. Luckily, it has nothing to do with the "Retro Thrash" trend that has spread all over the underground in the last decade. And that is something that I really dig and appreciate. I mean, the band has been active for 20+ years. They should be enough for "street creed". "Corporation" is made of 8 songs, all killer no filler. Lots of variation and tempo changes make this album a great listening experience: mid to fast paced aggressive music with a lot of variation. You’ll find some blast beats here and there, slow and heavy parts, some groove to bang your head to and mostly, in your face Thrash Metal like it was meant to be. If you ask me, these guys have taken influences from bands such as EXODUS, SACRED REICH and EXHORDER and made them into their own style. First off, the overall sound is amazing. It’s razor sharp and heavy as a ton of bricks, but it is no overproduced crap like so many bands out there. All the instruments sound natural and sit really well in the mix. Seba’s (guitar / vocals) performance is really good. His vocals are gruff and shouted, very similar to some 80s Crossover bands. Along with Krzychu, they churn out amazingly solid riffs in each of the songs. Diabel tightens up the whole thing since the bass is really present in the mix. And Shambo provides the perfect backbone with an excellent and inventive drum work. These guys know what they are doing, but best of all, they know how to come up with some great and memorable songs. This album has been spinning in my car non-stop and I know for a fact that it will stay there for some more time. Go ahead and give the band some well deserved support here: www.facebook.com/krkareathrash. And get their album here: www.defensemerch.com