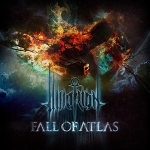 This came straight from the darkest bushes to me… WHORION, a new 5-piece act from Finland that was formed just in 2009, and who chose a musical style for themselves that necessarily ain’t one of those easiest ones to digest at all: symphonic Death Metal. Yes, even as a term symphonic Death Metal must sound like a true oddball for many of us – and even creating something under this aforementioned file, must even scare many of us away completely, as I should believe. But worry not, the WHORION camp has come out from their tiny and dark cellar with such a product in their hands that doesn’t make them pale in any daylight but make them shine the blackest of blackness in the utter darkness instead. The guys have taken quite big boots to fill in as far as symphonic (or orchestrated) Death Metal done convincingly and infectiously is concerned. To me, WHORION sounds pretty much like a crossbreed of BEHEMOTH, SHADE EMPIRE and DIMMU BORGIR, still bringing in their own precious spices into this particular extreme Metal style, sort of making sure they can be certain about leaving an indelible impact on listeners. Well, they have indeed done so by this 4-track EP of theirs – leaving at least a great impact on me personally, proving to be true masters of their chosen style, and doing their very best out of it all. Bloody hell, I sincerely was impressed by this outcome of theirs. Whatever WHORION’s true mission might be in the future with the kind of stuff they have done on the "Fall Of Atlas" EP, I am certain already it will carry them far. WHORION are meant to rip some horizons apart – and build up their own cosmoses by the ingredients they currently have in the band – and will have in the future. This is seriously some really professionally executed, very atmospheric, all evil-oozing and oppressive Sympho Death Metal, so by all means put the band’s name behind your curious, burning ears at this point already, will you? More of WHORION’s realm of universal evilness can be found here: www.whorion.com, label: www.eternalsound.de