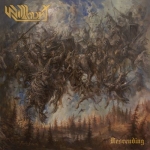 Since the release of their 5-track demo “Scenting The Prey” back in 2012, WILDHUNT definitely substantiated to be one of the more serious Austrian Heavy Metal bands among a sea of clowns. Metal On Metal Records seemed to share that believe and therefore signed the Carinthian trio for a full length CD output which was released only a few days ago. Because of knowing them since the very beginning I of course was really excited to get my hands on their first full length to see how far they have developed within the last 4 years. Unsurprisingly, “Descending” is with almost an hour of playing-time a very progressive and challenging record. The musicality is advanced as fuck and there are all kinds of weird leads, twists and breaks all over the record with all of the members delivering at the top of their game. The first track ‘Age Of Torment’ already surpasses the 8 minute mark and takes the listener on a journey of late 80s Bay Area Thrash worshipping à la HEATHEN, FORBIDDEN et al. The second track unfortunately already displays the blind spot within the WILDHUNT camp. Even though the band is able to create interesting melodies and performs on a very high level, they are in most cases not able to climax within their songs which is really sad. Said song is of course a nice composition but somehow it never surpasses the feeling it creates at the very beginning. Unfortunately this happens again throughout the record with tracks like the demo re-recordings ‘The Wild Hunt’ and ‘Death Spares (N)One’ or the new track ‘Thrill To Kill’ (even though I have to state that this song has one hell of an intro!). Another negative aspect of this record is the lack of passion and energy when it comes to the vocals. Wulfgar sputters throughout the songs without any real drive which contributes to the fact of the aforementioned climax problem. But there is, as above mentioned, not only negativity to be found on “Descending”. Tracks like ‘Erlkönig’ or ‘Crystal Death’ with its ‘Orion’ influenced middle-part are definitely small highlights, as well as the great production delivered by the band themselves. To finish this review off I definitely want to encourage you to check WILDHUNT out for yourselves to get your own opinion, they more than deserve it – www.wildhunt.at, www.facebook.com/wildhuntaustria or www.metal-on-metal.com