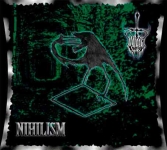 WIND HEARSE was a Black Metal band from Russia and active between 1991 and 1997. In this time they released a demo and a full-length, both in cassette format only. Their full-length called “Witch’s Arrows” was finally released back in 1996, shortly before they disbanded. Their style takes us back in time to the years 1990 to 1992, when raw and unpolished Black Metal in the vein of BURZUM or old DARKTHRONE saw the light of day and changed the whole Metal scene. The presented seven songs of their debut have a proper recording quality and proper songwriting and are recommendable for fans of above mentioned bands. The music is kept raw and primitive and the drumming and vocals are really harsh and heavily influenced by BURZUM and his debut release. The distorted guitars are also raw and create a disturbing atmosphere. The guys knew well how to re-produce their musical influences. Track eight of the original album has been left off but the three tracks of their demo release “Trident” have been added as bonus and show the album songs in their even rawer demo versions. For fans of the first wave of Black Metal and collectors, who are into the Russian scene, this re-release might be interesting. I prefer to stick to the originals. Like always from GS, this release comes in a nice digipak, limited to 100 numbered copies. It sells for 6 Euro (the slipcase edition plus patch for 9 Euro) from unit8sf@yandex.ru. More info here: www.gsp-music.com