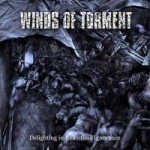 WINDS OF TORMENT are a self-proclaimed melodic Death Metal band from Saint-Etienne, France. After listening to the CD a few times melodic Death Metal just doesn’t quite describe this music accurately. This stuff is all over the place. Take the song ‘The Other’ for instance, following an acoustic interlude all of the sudden the music gets heavier at about the 1:10 mark and it sounds exactly like Opeth (when I say exactly I mean exactly, the guy growls just like Mikael Akerfeldt) for the next 45 seconds until the song abruptly shifts gears and all of the sudden it’s some melodic Thrash Metal. While these are not the only two styles that the band uses most songs on the CD use the same technique of blending together sometimes completely different styles of Metal. The technical prowess of the band is undeniable and as usual I payed close attention to the drummer who does a wonderful job especially considering all the different styles of music he must play and I also really enjoyed the guitars. At the end of the day though, this album leaves me a little unsatisfied. It’s just that too many times I would find myself enjoying a passage of a song only to have it change abruptly. I very rarely really like albums like this but I know there is a segment of people out there who would probably eat this stuff up. Other than the randomness of the music I also didn’t care for all of the vocals. I would assume that several members of the band sing, because some of the vocals sound too different to be the same person. One of the guys has a perfect growl though (like I said earlier, imagine Akerfeldt). Bottom line, if you like your music to be a juxtaposition of different styles then you might want to check these guys out. At least these guys are doing their own thing. You can find info about the band at the following websites: www.windsoftorment.com, www.myspace.com/windsoftorment, www.mascotrecords.com