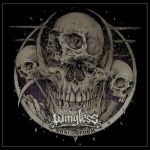 Krakow, Poland based Metallers WINGLESS were formed around 2012 and till now they released four full length albums. While tracking back the past of this act, the strange thing to notice is that their debut effort “Hatred Is Purity” nowhere near already suggested anything about their current delve into the Death Doom terrain. It was rather a highly experimental record, with a contemporary modern style. A track like ‘Ayahuasca’ says it all. The second full length “The Blaze Within” (from 2014) was also in the same experimental zone, wavering in between a modern, Gothic and somewhere Avant-garde sound. However, after that something happened in between four years and the band showed first signs of their Death Doom style in their third effort “Triada” (2018). Songs as ‘Captain’s Dreaming’ and ‘Tired Of This Fear’ surely established their leaning on PARADISE LOST, ANATHAMA, CATHEDRAL style, sound and atmosphere. Surely that impact lasted long for them, as WINGLESS now returned with their fourth offering “Nonconform”, which is firmly rooted in the forever tantalizing zone of Death and Doom. It’s dark, dank and miasmic. The trio of guitarist Gregor Luzar, vocalist Michel “Xaay” Loranc and drummer Piotr Wójcik became intertwined and captured nine tracks, without being obvious and predictable all over. Each one of them bears that nonconformist essence in song-crafting and visions enough to provoke the urge of repeating and rewinding. Tracks like ‘Separated From All Life’, ‘Contemp And Defiance’, ‘Constellations’ or ‘When You’re Short Of Tears’ will not only bind its listener with heavy mid-tempo transitions, but also their unusual open play style keeping on conjuring melodies from uncharted territories. Here the Polish show their possession with GORGUTS (especially by the avant-garde legacy of Luc Lemay) and songs like ‘Separated From All Life’, ‘Wingless’ and ‘When You’re Short Of Tears’ showcase their ability to unite that style almost effortlessly. Credit has also been given to the free flowing and warm sounding production, that never felt confiscating. Besides the obvious skills that these Polish guys do possess, the lyrical content brings on their far-reaching and deeply contemplative gazes towards life and beyond. The cover art also reflects that, which was created by revered Rafal Wechterowicz (SLAYER, MASTODON, NILE). So, it can be said that by releasing “Nonconform” WINGLESS added further mystery and thought-provoking diversity to their discography. Selfmadegod Records now made this record available on CD and digital formats and it shall redefine their status in forever enticing the Polish underground. Explore more here: www.facebook.com/winglessofficial, www.facebook.com/selfmadegod