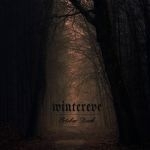 WINTEREVE from France are active for seven years now and have just self-released their second full-length entitled “October Dark”. The band plays 90s influended Doom / Death in the vein of MY DYING BRIDE, THE GATHERING, THEATRE OF TRAGEDY, THE 3RD AND THE MORTAL or newer outfits like DRACONIAN. I really dig this kind of style since I was 15 years old, but normally do not like too much female vocals in it. Anyhow this album somehow caught me, as the music really has this 90s vibe, the doomy rhythm guitars are so good and deep and the male grunts, which are pretty harsh, really fit well to the songs and vary the female vocals. The songwriting is pretty matured and especially when they increase the speed like in ‘Sea Of Suffering’ the songs show their full potential. The lead guitars are very good and the melodies and solos are definitely worth to hear. Sometimes you can hear the strong influence of MY DYING BRIDE during their “Angel And The Dark River” period which is not bad as WINTEREVE found their own way to interprete their influences. And the longer the album spins the more beauty appears and for a self-released album, the production is very good and absolutely clear. The piano parts are very well-dozed and the sad lead melodies are really arousing a sad, but not too desperate atmosphere. Tracks like the title track ‘October Dark’ also have some really memorable bridges and choruses and make this album a diverting trip back into the good old 90s and definitely worth to check as we go through some dark times nowadays and there is no end in sight. Rounded off by a pretty fine cover artwork it is time that a proper label picks them up to release their material for a wider audience. For more info, please check the following sources: www.facebook.com/winterevemusic, https://wintereve.bandcamp.com